Anyway, I am proud and more relieved to say that our slab has finally gone down on our land and construction has officially started on our house. In the next 6 months, we'll be moving into our first home together.

We've been taking pictures of the progress so that we can compile it together and really track the progress. How fun!

Spring is finally upon us so its great to be able to wear flip-flops out and shorts again. My legs can finally get some vitamin D.

One of the great things about living in Australia is the cheap domestic flight sales with Jetstar.

Within 10 mins, we clicked on a few buttons and we're off to Melbourne again next year for darren's birthday in February!!

AU$610 for 2 pple is quite a good deal. I'm looking forward to shopping till we drop, eating at all the divine cafes and restaurants and we'll try to squeeze in some time to check out investment properties as well.

I love my husband.

I don't know anyone else who would put up with all my crap, whinging and whining. He knows how important weekends are to me, and always ensures that our weekends are fun. He remembers what i'm craving for and the next day, its sitting on the table. He even support my ridiculous shopping habits.

On Sunday, we were walking past a shop and i tried on a pink, silky, low-backed dress. I really do have a thing for low-backed dresses. Think its quite evident from my wedding gowns.

I went into the dressing room, came out, did a few pretty twirls for him and attempted to walk out of the shop empty-handed. The next thing i knew, i saw him take out his credit card and pay for the dress. Bearing in mind, i still have about 5 un-worn dresses and some of them are still hanging on the rack with price-tags.

He was feeling a little under the weather but because he promised to take me out for dinner on Sunday to make up for the horrible food we ate on saturday, he got out from bed and off we trooped off to have a fabulous italian meal.

I keep a water-bottle next to the bed, and i dun ever remember filling it up. Why? He always fills it up for me once the water level gets low.

I usually fall asleep earlier than him and he always tucks me in under the blanket and gives me a good-night kiss, before turning off the light and moving to the computer table so that i can sleep in the dark, while he surfs the net or watches a movie

Marriage has really brought out the best in him and i really don't wish for anything more. Oh, maybe just one tiny request to win this week's $20 million superdraw so that i can get him that sports car and anything else that he has his eye on.

I'm still very much alive and kicking here. We've survived Winter and Spring will be upon us in a few weeks time. I can't wait for it to come. My legs have not seen sunlight for the longest time cos its always covered by leggings/stockings/jeans. I can't wait to wear my open-toed heels, sandals and my summer dresses!

September is gonna be quite a full-on month for us. Birthday celebrations, darren's MBA convocation, even though he officialy graduated a yr ago and most importantly, our house will start building on the 1st week of september. For those who know me, we purchasd a land since last Nov and have been waiting for the building license to get approved since February. We've been paying interest on the land since Feb and thats about $1600 everymonth flying out of our pockets for an empty land! We're so glad we can finally see the light now. The house will be completed in 6 months time and we're gonna start shopping for furniture, choosing tile colours and checking out design magazines for ideas.

On the marriage front, things have been good. We occassionally get into squabbles over really small stuff, but its just teething problems of living together. Just last week, i briefly mentioned to darren that i missed eating the apple strudel from Corica and when i got home yesterday, there was a whole box of strudel waiting for me in the fridge. Bliss. Between us, he is being the better half and I'm gonna have to step up.

I've been learning how to cook and last week, i made shepherd's pie. It was really good! We bought a dutch oven 2 weeks ago so i need to start looking at recipes to get ideas.

Work has been great. Im getting the hang of everything and got over the initial shock of being the only asian in the office. I think everyone has gotten used to me and my accent, just like how i had to learn to understand the different accents eg British, Scottish and Irish. We've gotten into quite a set routine of hanging out with different groups of friends as well. I don't feel that homesick anymore.

I can't wait for our trip down south over Christmas and to go back to Singapore in Feb. We're making plans for Europe on our 1st yr wedding anniversary so fingers crossed on that. Life has been really good and i'm sure with both of us in it together, things will only get much better

In less than 2 weeks time, my life as a tai-tai wannabe, housewife ( whatever you call it) ends cos i just accepted an awesome job offer from Hudson! My office is located 2 streets away from darren so we will be going to work together from now on.

Its really awesome how this was the only company i sent out my resume to when i arrived in Perth and within 2 days, they started the whole recruitment process. I felt like jumping out of my skin everytime the phone rang because i was sooo keen on this job. My manager and i really clicked the first time we met, and throughtout the whole process, i felt so at ease with them.

Since we're right smack in the middle of the CBD area, the office overlooks swan river on one end and the city on the other. We have an indoor cafe called the terrace where i saw 2 vending machines full of chocolates, snacks, chips, drinks and softies. Oh, did i mention its all free?

I'm really looking forward to joining the gym on our corporate membership and going for lunch-time classes . Also, im so glad that i get to dress up again instead of hanging out in jumpers and track pants. Dressing up for work is gonna be different from being in Singapore cos i get to layer up in scarves, coats, knit dresses and wear boots to work. SO FUN!!

Everything is turning out so well. Im so happy!

We went for a short honeymoon to Phuket cos our sole aim was to soak up the sun before returning back to wintery perth.

Heard so many good reviews abt the Racha that we absolutely had to go and see it for ourselves, so we spent 2 nights at the Racha and another 2 nights at Burasari at Patong Beach itself.

Darren wasn't too keen on the 45 min speedboat ride out to Racha and because of the huge waves we arrived at Batok Bay, which wasn't TAT impressive as compared to what we saw in their website. We were in the same boat as a whole bunch of Japanese Tourists, who were screechy and were dressed in heels and a full face of make-up. It was quite a hoot seeing how they had to naivagate the floating platform upon arrival. As the speedboat raced along, the waves splashed in and no prizes for guessing who were screaming the whole way cos the sea water was ruining their makeup

Anyway, the truck came to drive us to Racha itself and it was really beautiful. Im lazy so im going to let the pictures speak for itself. We arrived during Monsoon season so we were quite lucky to get sunshine most of the time

The bedroom was so spacious and we thoroughly enjoyed the outdoor shower.
Food was really sumptious, but pricey though. So during our lunches, we walked out to the local restaurant abt 500m away from Racha and enjoyed the same cuisine at half-price

On the 3rd day, we left for Burasari and it brought us into a totally different environment. Racha was on a secluded island so it was peaceful and romantic the whole time. Patong Beach is the tourist hub and i was secretly glad to be back to a noisy environment. Guess im really a city girl at heart

In Patong, we ate as much seafood as we could, had fun bargaining during shopping, had very very cheap 'chang' beer at the pubs, ogled at the lady-boys, spent mornings at Patong beach lazing on the beach chairs but most of all, it was nice spending time with my husband

He planned another surprise trip to Melbourne the day after we arrive in perth, so i'll post pics of that later.

Lady Boys dancing on the platform

Resting at our day-bed

We went on the ATV safari trail which was really great fun. It also resulted in very muddy feet and clothing

At the infinity pool

THe floating platform. When a wave surged in, the whole platform moved along with the wave. Imagine the balancing act

At the racha waiting lounge

Its been a month since i last posted an entry and so much has happened. Its my 2nd week being in Australia and except for missing my family and friends, its been really fun

1) I got married!
2) Holidayed in Thailand and Melbourne
3) Chopped up a whole chicken by myself to make chicken soup for the freezing winter nights
4) Became a whiz at ironing men's business shirts
5) Went for interviews and crossing my fingers that i'll get a positive response by end of this week
6) Enjoying being a house-wifey

ok, so here are some pictures. 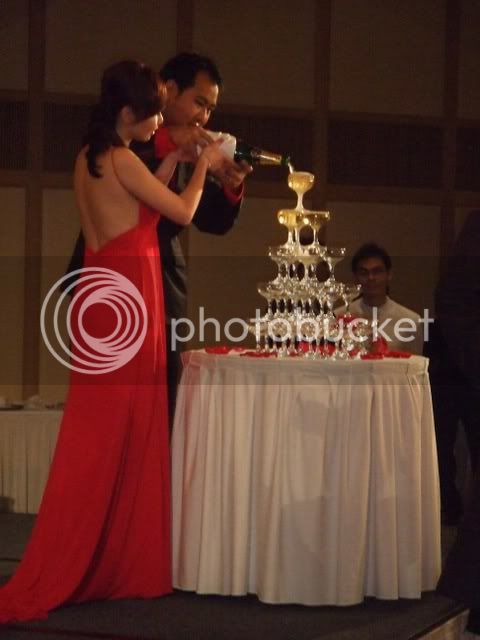 How does one usually feel a day before their wedding??

Its so real now and im feeling excited, nervous, tired, anxious all rolled into one. This is going to be one memorable weekend

I finally know the reason why i haven't started with my packing.

Because once i start packing, the reality and finality of me moving over to Perth for good is gonna set in.

Last night, i got overwhelmed with battling trying to walk around with a strong facade or totally crumpling into a mess. I caved in.

My mum was lying on the bed while my dad was giving her a massage when i opened the door, flung myself on the bed beside them and started sobbing about how i don't really want to leave and how i'll miss them.

So my mum pulled me close to her, stroked my hair and whispered that this is what i have to do and that we all have to move on. We promised daily phone calls and regular visits to each other. She kissed and hugged and told me everything is going to be alright

The next 3 weeks are going to be really bittersweet and lifechanging.

You would have thought that i would be in full wedding mode by now. Its about one month to the wedding and I'm still sitting around at night and twidddling my thumbs.

Im horrible. I procrastinate even with my own wedding stuff!

So i will start from tonight and next week. See, procrastinating again

Anyway im looking forward to my trip with Michelle. This is to celebrate our 10th frienda-vasary. We're just going for a massage and spa session
but it'll be good to spend some time alone with her :)
Collapse